Spike Lee, Denzel Washington, and the Fine Calibrations of The Inside Man 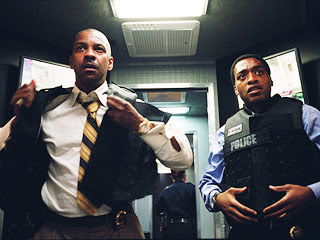 In the proud tradition of Dog Day Afternoon, Serpico and other 1970s cop dramas, Spike Lee’s The Inside Man concerns a robbery of the Manhattan Trust Bank set deep in Wall Street. The film opens with Clive Owen as robber mastermind Dalton Russell abruptly explaining the who, what, where, how, and why of the film in part because these basic elements of storytelling are merely the pretext of a very sly plot full of masking and subterfuge. Some people dressed like painters walk into the bank, use infra-red flashlights to black out the security videos, and then take everyone hostage. When one lone cop nearby notices smoke coming out of the front doors of the building, a masked man appears pointing an AK-47 rifle at his head and tells him to go away.

Then, Denzel Washington and Chiwetel Ejiofor promptly show up as Detectives Keith Frazier and Bill Mitchell respectively. They meet Willem Dafoe (Captain John Darius) in the Mobile Command Center parked outside, and immediately one senses how much of the drama will concern various attempts at undermining Detective Frazier’s authority. Does he have control over this hostage situation or does Dalton Russell? Meanwhile, back in the bank, Russell forces his hostages to give up their cell phones and then put on identical jump suits, hoods, and masks, so now the hostages look identical to the bank robbers who use variations of Steve (Stevo, Stevie) when talking to each other. Pretty soon Dalton Russell does the usual thing of demanding some buses and an escape jet for not shooting hostages, which of course Detective Frazier does not give him, so the film arrives at a kind of stalemate in the night. Why does Dalton Russell sound so relaxed behind his mask? Why does he seem to be stalling for time? When Frazier bugs the pizza boxes that they give to the bank robbers, who is speaking Albanian inside the bank? During these long moments of tension, the film finds an odd space to play around, to improvise jazz-style on its themes.

Spike Lee, once known as the premier African American director of the 1980s, has, like Woody Allen, fallen some in prestige with many recent films not earning much money or attention. We study his Do the Right Thing (1989) in film class as the ultimate statement about race relations in America, a movie that many feared would set off riots, but I haven’t seen much of anything of his since the early 90s with Malcolm X (again starring Denzel Washington) and Jungle Fever. And just as Woody Allen has recently regained some of his earlier clout with last year’s Match Point, Inside Man should do the same for Lee. In both cases, directors used a tighter, more commercial script to regain people’s attention, and they both enjoy the adulation of actors who are willing to sign on just to work with them. For instance, Jodie Foster has admitted that she doesn’t particularly care much for acting in dumb movies (as in Flight Plan), but she signed on to Inside Man in part just to work with Lee, and in return she gets one of the rare roles that actually suits her intelligence.

When the owner of the bank, Mr. Chase (Christopher Plummer) realizes that there are some highly sensitive documents of his stashed in a safety deposit box, he dispatches Madeline White (Foster) to directly interfere with Detective Frazier’s hostage negotiations and weasel her way into the bank. Dressed in a light brown power suit and relishing her role as a “magnificent c---,” White promptly hustles ’s mayor into showing up at the crime scene to put pressure on Frazier to let her in, and he reluctantly gives in. The chess games continues, but the film is ultimately concerned with the nature of power and the corruption of the elite. I usually cannot stand hostage dramas for the cheap ways they tug at the viewer’s sympathies, but Spike Lee undercuts that concern by intercutting the hostage drama with over-exposed fast forward scenes of the hostages getting interviewed by the police after the crime, so we know many will live through the ordeal.

Inside Man is not perfect. It drags a little in the latter half, mostly because contemporary audiences have become used mindless action and sensation instead of talkative scripts with subtlety. With several more twists and an ingenious conclusion, Inside Man still has time to dwell on the race-stereotyping of modern day video games, the racial profiling of Muslims in the , and the way the rich mask their exploitation of the poor. As Jodie Foster says to rich Mr. Chase at one point, “When there’s blood on the streets, buy property.” But what really matters is watching Denzel Washington relax under Lee’s direction to take command of this film. Detective Frazier not only has a hostage situation to negotiate, he also has a girlfriend waiting on him to come home, and as she puts it, “The handcuffs are getting cold.”