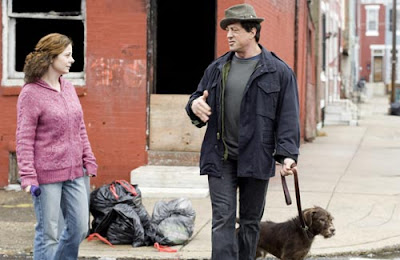 How do you like your boxing movie? Tart, mean, aggressive, bloody, ironic? How about syrupy sweet with a heavy dose of nostalgia? In Rocky Balboa, the credits are scarcely over before Rocky goes wandering around to relive the memories of his wife Adrian (Talia Shire) who one can imagine did not want to return for Rocky 6, so Stallone had her conveniently killed off from cancer. Rocky visits his old apartment, where he persuaded the once-shy to come inside, then the rundown condemned building where she used to work at a pet shop. Most poignantly of all, he walks outside at night in an abandoned lot where there once was a skating rink, all the while reminiscing to Adrian’s brother Paulie (Burt Young), who understandably just wants to get out of the cold.

While watching this regurgitated schmaltzfest, I had to struggle to remind myself that the original Rocky (1976) is quite good. Written and directed by Sylvester Stallone, it won the Oscar for the best picture of that year. Stallone went on to produce one other reticent action hero, Rambo, who represented jingoistic fantasies of one man’s military revenge in , before his career gradually bombed. I saw some of Rocky 2, but 3, 4, and 5 had Stallone sink deeper and deeper into self-parody. Stallone tried out comedy with Oscar (1991) and science fiction with Judge Dredd (1995), but now he seems resigned to putting on the same old porkpie hat with the front turned up, his grey sweatshirt, and winter coat for one last mumbling visit to .

Once again, a young African American reigning heavyweight champion, in this case Mason Dixon (Antonio Tarver), has some trumped up reason to pull Rocky out of retirement for one last exhibition match. Mason Dixon wins boxing matches, but no one likes him because he’s callow and arrogant, so it’s up to our modest hero Rocky to show him a “life lesson in courage.” Meanwhile, Rocky vaguely dates a sad sack woman (Geraldine Hughes) that he finds in some scummy bar. He takes her son out to the pound where they pick up a highly emblematic old ugly dog that they call “Punchy.” They could’ve gone for a younger dog, but Rocky still sees promise in the old mutt, especially in the way that he lies on his side, reserving his strength. Later, during the inevitable training montage set to the same old song “Gonna Fly Now” (or whatever its called), Rocky carries his dog up the steps of the Philadelphia capital building, so he can hold Punchy up in victory now that he has his wind back.

There are also various subplots. Rocky’s son (Milo Ventimiglia), who works as a corporate drone, does not approve of the possibility of Rocky embarrassing them both by losing one last fight. Rocky tells him that what matters in this world is how well you take those punches, because the world will always try to wear you down. The son then quits his job and becomes Rocky’s disciple. Also, Paulie gets fired from his meat locker job, so he and Rocky share a poignant moment. I guess I was supposed to get worked up by all the ways Rocky fights to rise up out of his hard-scrabble working class world. He just wants to find a little redemption as he goes out to visit ’s grave one more time (sniff).

After the big fight, where Rocky blocks Mason’s punches with his head and bleeds theatrically, the credits sequence shows us random people--pregnant women, kids, and teenagers running up the Philadelphia state house steps to throw their arms up in the air and jump around in triumph. Now that Stallone has shared his populist fantasy with everyone, dispensing uplift throughout the land, we can only hope it’s for the last time.

mattand said…
One quick nitpick: the steps Rocky runs up belong to the Philadelphia Art Museum. I occasionally run up them myself with my dog (a Boxer, ironically enough.)

Interesting review. I've been holding off on renting this because as you point out, some of the other films are borderline SNL skits.