The bag man and the ice queen: George Clooney and Tilda Swinton in Michael Clayton 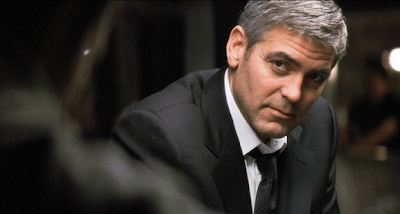 Directed and written by Tony Gilroy, Michael Clayton is bracingly vicious. As the titular character, George Clooney plays a fixer or “bag man” for , Bach, and Ledeen, a huge law firm in . While other lawyers have earned partnership and prestige in the firm, Clayton basically cleans up messes. If there is a scandal that needs to be hushed up, a drug-addicted wife who has gone out of control, or a prominent politician who commits a hit and run, the firm calls Clayton. He has grown dissatisfied with the scummy janitorial qualities of his job, so he invests in a local restaurant, but his partner, the alcoholic brother Timmy, failed to hold up his end of the deal. Now he must liquidate all of their business assets.

Basically, Clayton inhabits a corrupt middle-aged world where just about everybody sells their soul to keep their equity and their house in the , and he’s starting to have doubts about his commitments. Meanwhile, Arthur Edens (Tom Wilkinson), works as the defense architect for a massive six year 3 billion dollar class action suit against the U/North agrichemical company. He has logged in innumerable hours defending a large corporation that poisoned a bunch of farmers with something cancerous in their drinking water. Where Clayton merely has doubts, Arthur fully revolts against his career choice. Suffering a manic episode in the process, he takes off all of his clothes during a meeting with the defendants. Now the legal team of , Bach, and Ledeen has a nightmare situation where it looks like one of their best lawyers might have just switched sides, and once again they need Clayton to fix things up. Michael flies out to to subdue the raving Arthur by keeping him trapped in his hotel room, but he escapes by the next morning.

With 3 billion dollars at stake, U/North’s in-house chief counsel Karen Crowder (Tilda Swinton) has to do something. She hires a surveillance team to track Arthur’s movements and phone calls back in . Inexplicably, Clayton finds out that someone has rigged his car to explode. He barely manages to avoid incineration by getting out of his car to admire some horses on the edge of a field.

For his part, Clooney continues to impress me with the unpredictability and the edginess of his choices as a director and actor. Given his easy smile and brown-eyed charm, his hair now getting a little grey in his late forties, Clooney could star in the types of movies that Cary Grant used to frequent—comedies and slick international thrillers. Clooney does star in the Ocean series for the money, but he also works hard to greenlight issue films that explore things like the integrity of the press (Good Night and Good Luck) and peak oil (Syriana). Michael Clayton can be classified as a thriller, but it lingers in the mind more as an expose of the betrayal of the public trust that has become second nature to both big business and government.

Michael Clayton is too labyrinthine to explain very easily, but I thoroughly enjoyed its ice cold vision. Corporations continue to master the art of public relations, but when their wholesome image masks cancerous business practices, you can find utterly fake people like Karen Crowder practicing their lines in front of a mirror before the cameras roll. Tilda Swinton played the evil ice queen in The Chronicles of Narnia, and she continues to play one here. With her pale skin and business formal outfits, she shows how despair and ambition can coil behind a chilling facade. Repeatedly in the film, U/North’s televised ads proclaim that “We plant the seed,” and “We grow your world together,” but underneath all of the glowing pictures of smiling children and wheat fields blowing in the breeze, Michael Clayton delivers a toxicology report of corporate and legal depravity that appears all too real.