The vamp, the drunk, and the boomer matriarch: the mixed signals of Georgia Rule 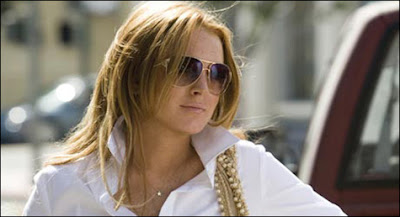 Georgia Rule left me scratching my head. Do you like to see grandmothers, mothers, and daughters arguing about longstanding grudges? How about yet another Hollywoodized version of small town , in this case in , where the good folk attend fourth of July barbecues and whimsically take their pet pigs to the vet?

Competently directed by Garry Marshall, who once helped Julia Roberts attain fame in Pretty Woman, Georgia Rule concerns Rachel (Lindsay Lohan), a wild redhead who means trouble. She wrecks her car, drops LSD, and generally carries on so that her alcoholic mother Lily (Felicity Huffman) decides to leave her with her own mother Georgia (Jane Fonda) in the town of for the summer so she can be taught some sense. In dramatic contrast to her uncontrollable progeny, lives by set rules (hence the title) such as “You live here, you work,” “No blasphemy,” and “Those who miss dinner will have to do without food until the next morning.”

At first, Lily can’t even manage to get Rachel to her grandmother’s house. En route, Rachel jumps out of the car, walks along the highway in a flimsy white dress, and eventually falls asleep under a “Welcome to ” sign. Conveniently, a handsome young Mormon named Harlan (Garett Hedlund) stops to try to resuscitate her, but then she hops in the convertible of a local veterinarian named Simon (Dermot Mulroney), so he reluctantly drives her into . Lily has already left, so Rachel confronts by saying “Try to jerk me around.” curses at her and stomps off. They make up the next morning, and so on.

While it’s ultimately not very good, the film left me wondering why Lohan would sign on to this vehicle. One can assume that at the time she could get a role in just about anything, so why this incoherent dramedy in which she wears her attractiveness like an angry badge of pride? In the old days, starlets would find ways to make themselves mysterious and alluring. Here, Lohan’s character is as crass as a young prostitute. When Harlan decides that he would be “safer being thrown from a horse,” Rachel replies with “At least you don’t have to brush or feed me after riding me.” Once she quickly seduces the virginal Harlan on a fishing boat, he confesses of their misdeeds to his Mormon girlfriend. Consequently, Rachel has various girls spying on her as a kind of small town variation of the real-life paparazzi that Lohan has to fend off every day. I imagine that Lohan picked this script because it allowed her to indirectly express her frustrations with the prurient celebrity circus she lives in, but the film seems just as conflicted about what it is trying to say as she is.

To the movie’s credit, I never could tell where it was going, but Georgia Rule mostly dwells on Lily’s alcoholism and the possibility that Rachel was sexually abused by her stepfather Arnold (with Cary Elwes getting the thankless role). Once Rachel mentions that she was raped at age 12, Lily drives over to confront her. Many more scenes ensue with the three actresses dredging up old family problems, saying things such as “Why didn’t you ever say you loved me?” and “None of all this is your fault,” and “I only said it to see if you would care.” Lily drinks gin, obliging Rachel and Georgia to carry her up the stairs. When shows up, threatens him with a baseball bat, but Jane Fonda had more opportunities to show off her acting ability in Monster-in-Law.

Georgia Rule skillfully depicts the kind of extreme estrogen-fueled fights that teenage daughters have with their mothers, but ultimately the film’s unorthodox blend of comedy and drama left me more bewildered than entertained.