Hollywood Collides with the Heartland: the Mess of Elizabethtown 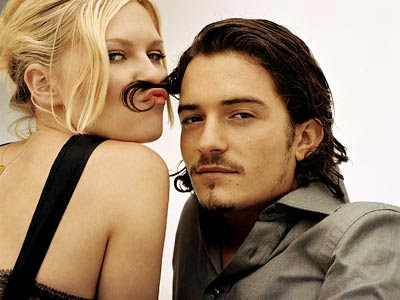 Cameron Crowe, who wrote and directed Elizabethtown, made some excellent films in the past including Say Anything (1989) and Almost Famous (2000). Crowe began writing music reviews for Rolling Stone magazine at a precociously young age. Ever since he snuck into a high school to research Fast Times at Ridgemont High (1982), Crowe has written about young people in their pop culture milieu with unusual sensitivity and understanding, but now that he’s in his later 40’s, he appears to be losing his touch.

The film begins in Oregon with Drew Baylor (Orlando Bloom), a designer for a Nike-like company, suffering the humiliation of his new “Spasmotica” athletic shoe getting rejected by the American public. The owner of the company known as Phil (Alec Baldwin) points out that Drew has personally cost the company close to a billion dollars, so he gives him a tour of all the programs he will have to cut, including an environmental watchdog project, before firing him. Understandably despondent, Drew drives to his apartment to commit suicide before his sister calls on his cell phone to tell that his dad has just died, and he needs to fly to Elizabethtown Kentucky to take care of his memorial service. On the red eye flight over to Louisville, Drew tolerates an unusually talkative stewardess (Kirstin Dunst), who gives him directions to Elizabethtown. After getting lost on the highway, Drew shows up in the sweet heartland town where everyone waves at him, and then he has to deal with the relatives, not to mention whether or not to cremate his dad.

Since there isn’t a whole lot of narrative drive except the need to get to the funeral, the film meanders along, throwing people together, and looking for whimsical moments of emotion reinforced with pop songs on the soundtrack. Bloom looks far too elfinly good looking to sit amidst these regular Americans, and I kept noticing how Crowe relies on star power to make up for his problems with the screenplay. What do movie stars have to do with the people of E-town? As Drew’s Oregon girlfriend breaks up with him on the cell phone, Claire simultaneously, and predictably starts up a relationship. In an amusing scene, they talk throughout one night before meeting on the highway to watch the sunrise. Basically reprising her romantic comedy lead role in Wimbledon and other films, Kirstin Dunst tries to cheer him up though he’s not really mourning, yet. He didn’t really know his dad. As he flirts with Claire, Drew says he’s been asleep for most of his life, and, watching this film, I could sympathize.

Crowe keeps trying to get at the truth of Drew’s disengagement with his life and family, but the film seems to drift instead. Things start to really unravel during the memorial service when Lynyrd Skynyd’s “Freebird” gets played live and Susan Sarandon (playing Drew’s mother) arrives to mourn in front of the crowd. She starts to tapdance tragicomically, and I wanted to avert my eyes. My wife, a Kentucky native who had anxiously awaited this film, pointed out that “Elizabethtown” suffers from a lack of focus. As a story, it doesn’t know what to emphasize, and while I respect Crowe’s wish to resist predictable plotlines, one also doesn’t like to see a film that stops dead several times before it finally ends. If he wanted to write a love letter to the “genuine” people of the heartland, he still needed to find a backbone of a story to involve the viewer. Yet another retread life-affirming romantic comedy with the otherwise capable Kirstin Dunst doesn’t wash.