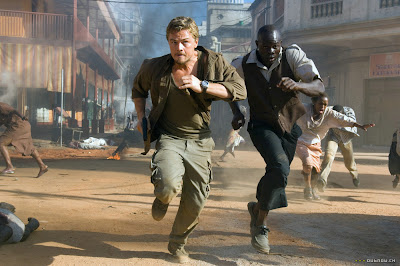 Like some real-life social injustice with your escapism? You get an uneasy mixture of both in Edward Zwick’s Blood Diamond. One part civics lesson, another part action flick, Blood Diamond begins by laying out the historical problems Africa has always had whenever people can exploit the land for ivory, rubber, gold, and oil. Instead of simply profiting from the land, rebels use these natural resources to purchase guns and foster civil war. In 1999 in Sierra Leone, the rebel party known as the RUF used the diamond market for this purpose, and they show up early in the movie with machine guns and rifles to shoot up Solomon Vandy’s (Djimon Hounsou) fishing village so they can “recruit” boy soldiers for their cause, chop off other people’s hands, and drag Solomon himself to the diamond mines. While under guard, Solomon soon finds a huge rare pink diamond while sifting through mud. He manages to stash the diamond between his toes, and then bury it just as government troops shoot up the rebel camp and eventually throw him in prison. Once there, Danny Archer (Leonardo DiCaprio) catches wind of Solomon’s diamond and releases him.

Danny is a pleasantly amoral, gun-dealing mercenary from , someone used to living by his wits and swagger. We first see him trading weapons for guns under highly dangerous circumstances. He hops off a plane just to have some rebel thug threaten to shoot his head off if he doesn’t supply him with the agreed-upon grenade launchers. Since the plane has taken off, however, Danny coolly says to go ahead and kill him--all he will get is a corpse if he doesn’t hand over the diamonds, and so the rebel captain gives in.

I imagine DiCaprio was drawn to this role because his character can still be pleasantly roguish even as the rest of the film wears its social conscience on his sleeve. With his devil-may-care grin and wily charm, Danny runs into Maddy Bowen (Jennifer Connelly) in a bar. It turns out that she is an American journalist, so they carry on an uneasy flirtation until Danny confronts Solomon with the offer to reunite his family if he shows him the diamond. Solomon initially resists the idea, but it just so happens that the rebels are in the midst of trying to take over the country, so the two “partners” have to dodge machine gun fire and escape the capitol before it explodes in partisan fighting.

Up until this point, I liked the film well enough. I found it thought-provoking and nicely critical of American news journalism that at the time was more concerned with ’s extra-marital affairs than with bloodshed in , but once Solomon and Danny start evading machine gun fire, the scene takes on an odd resemblance to a James Bond action sequence. On one level, the film wants to show us how Americans unknowingly purchase diamonds that help cause slavery and killings in south Africa, but it also wants to entertain us with DiCaprio and Connelly flirting in the jungle. All of that glamour comes across as a bit bizarre amidst massive refugee camps and Solomon just trying to reclaim his son who has been brainwashed to kill for the rebels.

Studio executives know that violence and movie stars sell movies, but audiences are used to emotionally disconnecting themselves from the many expendable people getting shot. Like Danny Archer, Blood Diamond wants to play it both ways, so, in spite of the excellent work of the actors, I ultimately found the film too emotionally manipulative and hypocritical. The 2 hour plus film builds to one last hike through the wilderness to find the diamond, and the director couldn’t resist several tear-jerking climaxes with tight close-ups on actors learning to care for one another amidst the next spray of gunfire.

However, the film definitely makes one think before buying a nice diamond for someone for Christmas.