The Invasion of the Nervous Studio Executives: Nicole Kidman, Daniel Craig, and the Body Snatchers 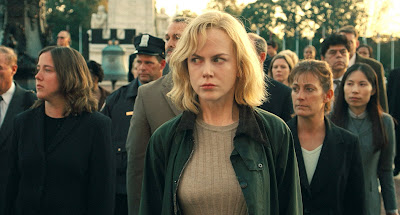 In the mid-1950s, during the height of anti-Communist paranoia, Jack Finney wrote a novel called The Body Snatchers, which carried the plausible premise that the last vestiges of humanity are systematically being replaced by creepy conformist drones. Aliens arrive from outer space and replicate people, leaving them functional but otherwise emotionless and mechanical, erasing the human spirit. After the successful and now iconic 1956 film version, filmmakers have remade the story twice, and perhaps that was enough.

Now Nicole Kidman and Daniel Craig star in The Invasion, and for multiple reasons the film does not gel. Warner Brothers studio did not like the original cut by German director Oliver Hirshbiegel, who, by the way, had never made a film in English before. So they brought in a new director and the two brothers who made the Matrix series, Larry and Andy Wachowski, to patch together a new version with several scenes reshot. The resulting film shows how too much pre-screen test marketing and studio interference can make a mishmash of a good but now tired story.

After a hook where Nicole Kidman’s character Carol Bennell strives valiantly to stay awake by ransacking a drug store for speed, the movie then backtracks to news footage of a space shuttle crashing and fragmenting over the US, infecting untold amounts of Americans with an alien contagion. Brought in by the government to quarantine the fragments, official Tucker Kaufman (Jeremy Northam) immediately comes in contact with a contaminated piece of metal. Soon enough, he calls his estranged former wife Carol and asks for his son Oliver to come visit him. We can tell something is wrong due to the glazed expression in his eyes, and the way he says
“I’m fine. I’m really fine. It’s such a nice house. I want to see Oliver.” Carol reluctantly drops her son off, and goes out to a swank party with handsome Dr. Driscoll (Daniel Craig), but there’s something wrong. One of her patients claims that her husband is no longer her husband because she saw him casually break his dog’s neck one afternoon. A pseudo-Census department official visits Carol late at night asking to see her for a survey, and he tries to break her door down. In short, everyone’s suddenly acting like soulless 1950s conservatives dressed in business formal clothes. Meanwhile, Carol cannot get hold of her son on her cell phone.

The studio interference becomes more obvious as the invasion develops momentum. Instead of simply telling the story, the editors inserted bits and pieces of action scenes out of sequence. Sometimes these intrusions illustrate patches of dialogue. As Dr. Driscoll conceives of the idea of stealing a police car and busting out of a quarantined section of the city with Carol, we see it happen on screen like a dream reverie. And there are too many jagged cuts where I found myself disoriented unnecessarily. Why is there blood on that wall? How did Carol end up in the subway? Perhaps the filmmakers intended the discontinuity to reflect Carol’s increasingly sleep-deprived and paranoid mindset, but the technique threw me out of the story instead of engrossing me in it. Perhaps the Wachowski brothers wanted to accelerate the movie by chopping out the dull parts.

Moreover, one can’t help but feel sorry for the actors. Compared to his rough-edged stripped-down Bond character, Craig comes off as mild and bland here. Now aged 40, Kidman looks amazingly well-preserved, but also a little silly running around Baltimore in her designer skirt and grey sweater, trying to tell who is real and who is Xeroxed. Her dilemma shows how any actor, no matter how A-list, is at the mercy of the filmmakers who frame her within a shot. If their hands seem unsteady, she can look trapped in the murk.

Lastly, the body snatchers lack an edge this time around. They rely on vomiting in drinks and on people’s faces to spread the contagion—an unsavory way to take over the world, and the movie doesn’t seem to know whether to resort to cheap horror effects or pseudo-profound reflections of the inherent violence in human nature. Yes, perhaps the alien strain can save us from recent events in Iraq, Darfur, and even New Orleans, but mainly the film conveys the anxiety of a studio losing money. In this mash-up remix that ultimately resembles The War of the Worlds with its cop-out ending, you can sense the studio executives’ fear of a bomb. As someone says to Carol on the street, “You’re sweating. They don’t do that. They will know.”
Labels: The Invasion