You may kiss the groom: Adam Sandler in I Now Pronounce You Chuck and Larry 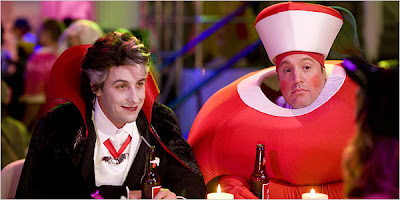 Every now and again, there comes a time in a reviewer’s life when he must consider a film like I Now Pronounce You Chuck and Larry. The die is cast, the film has been made and released, and there remains the grim job of commenting on the movie’s various fat jokes, queasy sexual humor, heart-warming moments of people bonding in a big hug, and most of all juvenile gags about middle-aged guys with accents.

I first witnessed the phenomenon known as Adam Sandler many years ago when innocently watching a video of Mr. Deeds. At the time, I was quite stunned by Adam’s slack smug smirking self-congratulatory persona. How did he ever establish a comedic empire? And why was Winona Ryder in the film? Since then, I have learned that Adam Sandler has a massive fan base. His movies invariably make lots of money, and ingénues like Drew Barrymore and others will happily appear in one of his films, even if the said movie frequently cuts to a dog humping a stuffed animal. In the history of cinema, there have been many stupid comedies. One thinks of Three Stooges movies, Dumb and Dumber, or There’s Something about Mary, but none quite bear witness to the current state of human evolutionary decline like Adam Sandler.

Recent Sandler vehicles like Click and Reign Over Me have reached for something a little more adult, but this current film is a kind of return to immaturity. I Now Pronounce You Chuck and Larry concerns two firefighters in who decide to pretend to be a gay couple so that one of them, Larry (Kevin James) can keep his children insured in case he dies of a work-related accident. Since he has just saved his buddy Chuck’s (Sandler’s) life during a firefighting mission, he obliges Chuck to share a domestic partnership. But when the city officials start to snoop around his home because they suspect fraud, Chuck and Larry must then travel up to to get married in a chapel. To maintain the illusion of a union, they also buy Wham cds, slap each other on the butt in public, and say “Balls and wieners” when answering the phone.

In Sandler films, I’m always freshly astonished by the amount of work people go through to set up a scene just for a gag. Early on, Chuck and Larry must run upstairs in a burning building to save a woman’s child who turns out to be a monstrously obese man lying on a bed. In the course of rolling him out of the building, he lands on Chuck’s head. And once Larry has established that Chuck is alive, the fat man passes wind loudly on top of him. Thus begins many fat jokes that compete with mock-gay humor that is borderline if not outright insulting. Late in the movie, Larry says that he’s tired of being called fat, but in the context of the film, that’s like regretting a glass of wine after drinking up all of the hard liquor in the bar.

As in the films of the Farrelly brothers, Adam Sandler specializes in gross-out humor that plays on stereotypes. If there is an overweight older woman in a scene, her heft and age are played for laughs. If an attractive young woman plays a medical doctor in one scene, she is likely to appear later in negligee just to satisfy the prurient interest of the adolescent males in the viewing audience. Instead of acting, Jessica Biel gets to spend much of the film being ogled. Steve Buscemi reverts to his nerd stereotype as the city inspector digging through people’s trash. At Larry and Chuck’s wedding, the Japanese fellow performing the ritual wears goofy clothes, goofy glasses, and he speaks with a lisp. I have not seen such a crass version of a Japanese character since Mickey Rooney goggled his eyes and wore buckteeth as Mr. Yunioshi in Breakfast at Tiffany’s in 1961, and it was widely recognized as a ghastly caricature back then.

In the end, Chuck and Larry learn lessons about tolerance, finding that sexual orientation has “nothing to do with who we are as people.” Thanks for the words of wisdom, Adam.

Labels: I Now Pronounce You Chuck and Larry

Anonymous said…
Adam Sandler is classic, though he tends to do his best work when he stays casual, not trying too hard to be funny or deep, etc.
July 1, 2008 at 2:08 PM